In a privately owned street on the East Rand lies a safe haven influenced by the architecture of an old Transvaal home. The brief to the architect was simple: “We would like a nice open-plan living space that gives us direct access to the outdoors.” What resulted was a year of planning and design work.

The architect worked on bridging the gap between the old and the new. The use of warm materials such as timber and facebrick in a triple-volume space added a traditional farm-style edge, while making the home modern and industrial.

The builders were given the mammoth task of building the home according to precise instructions, and some of the preparations they had to undertake included blasting out ground rock in a residential area. They also had to use specific building techniques, such as off-shutter concrete, plaster finishing and bag washing. The project required 18 months of detailed work, which included adding specialist features such as a lift, eco-friendly underfloor heating and a turbo vent ducting system.

The preparation and hard work was worth it, the owner says. He loves the outdoors and wanted a home that would make him feel as though he was outside, despite being surrounded by walls and windows.

He particularly enjoys the outdoor entertainment area that boasts an enclosed patio and swimming pool.

The home also accommodates the owners’ hobbies. A 400m² garage was perfect for housing his collection of vintage and sports cars.

His wife enjoys quilting and cooking, so she has a knitting room, and the kitchen features a classic old farmhouse stove. The stove was purchased by the family in London in 1996; whenever the family moved, the stove was sure to follow.

The owner is also an avid music-lover, which inspired the musical note finishes around the house.

Fitting in with the juxtaposition of old and new, the home was decorated with furniture that the couple has had for years, with modern features added to give the home a contemporary look. No home is complete without a garden and, in this case, a quaint and colourful, low-maintenance garden adds character to the home. 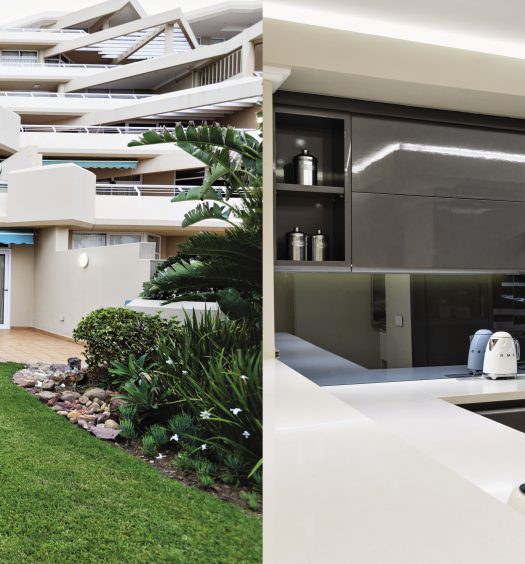