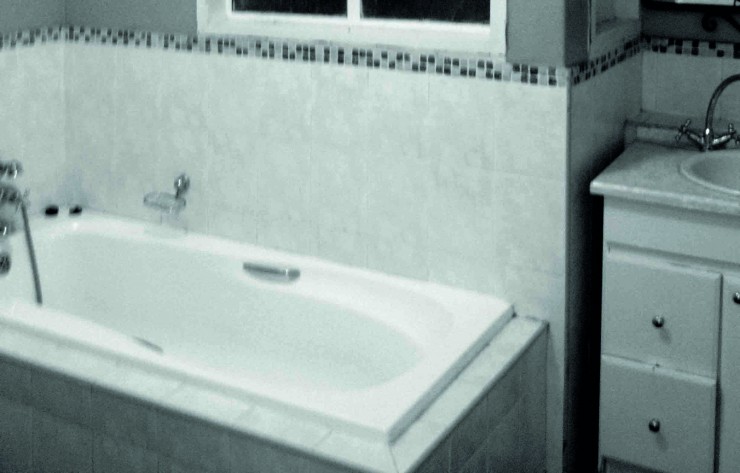 My stomach churned the first time I saw the flat,” says Eugenie Drake, owner of Piece crafts boutique in Rosebank, about her apartment in Johannesburg’s Parktown North. “It was dark and musty and the clashing colours were altogether ghastly. I really wasn’t sure whether I’d be able to live in it or not.”

After years of occupation by university students, the small flat hadn’t received much attention, other than the addition of a few unsightly holes in the walls. So, Astrid van der Heim, owner of Van der Heim Interiors International, and her team began by going back to basics. “When a place is stripped naked you’re able to see the shape of the whole space,” says Astrid. “We literally took everything out and started from scratch. We gave the place fresh new life again.”

Astrid covered the entire flat in Plascon’s Whimsical White (B5-B2-3) to give Eugenie a fresh, clean canvas for a new chapter of her life. “I was downscaling,” explains Eugenie, “which meant I could only select pieces that would work in a smaller space. I knew I wanted to make it my own and, not one for being cooped up, I needed it to feel spacious and airy.”

Whimsical White was the perfect choice, explains Astrid. “It’s extraordinary: as the light changes so does the paint. When I saw the white glove mould sculptures in Eugenie’s old apartment, they gave me insight into how simple and clean the makeover should be.” The sculptures now stand on a long, dark wood table for people to see wherever they are in the flat – a reminder of the openness and simplicity of the space.

“It’s close to the colour of the Johannesburg sky,” adds stylist Annemarie Meintjes of the Whimsical White used to bring a sense of light and space to the open-plan lounge and dining room. “When you look out the windows you see the colour you’re standing in and, at that exact moment you become one with the sky. Everything flows together – and that gives the illusion of more space.”

The colour was carried through into the small study. “The room was very box-like and just being in there for a few minutes made me feel claustrophobic,” says Eugenie. “I wanted it to feel open, and to let in as much light as possible.” So the top set of study cupboards was removed to let the room breathe and the cupboards opening into the entrance hall were removed and replaced with a pane of glass. “This was my favourite renovation idea in the whole flat,” says Annemarie. “It provides a view from the room into the lounge and the rest of the open space.

The kitchen, too, was cluttered and cramped. So Laminate Systems installed tall, narrow cupboards to open up the space without compromising on storage, and the SPACES team painted them in Plascon Enamel Doors & Trims in Fresh Linen (Y3-E2-3). The floor was painted in Plascon Floor Paint in Dark Mahogany (TFT 2) to tone with the existing parquet, and the breakfast counter was removed to make way for a table and chairs painted in Plascon Enamel Doors & Trims Whimsical White (B5-B2-3).

The dark, closed-in main bedroom was also desperately in need of more space and light. Here again, Astrid used Cashmere Whimsical White (B5-B2-3) to lighten and brighten the room. She complemented it with a dream-like accent wall in Plascon Cashmere Providence (B5-C1-3). The team also removed the top layer of cupboards to give a feeling of more space.

The worst room in the flat, the bathroom was painted a sick sea-green, with a mould-infested shower and windows that opened onto a wall. Astrid ripped out the shower and swung the bath lengthwise to allow more room to move, fitted a new shower over the bath, replaced the window panes with mirrors and painted the entire space in Plascon Kitchens & Bathrooms Whimsical White (B5-B2-3).

An artist with an exceptional eye for detail, Eugenie was there every step of the way, “watching artistry,” as she likes to call it. “It wasn’t building, but transforming,” she explains. “Looking at the flat now, it’s fascinating and sunny and bright. The team transformed this seemingly small apartment into a bigger, more balanced space that allows for reflection and creativity.”

And nothing could suit Eugenie better right now. “This is the closing of one era of my life and the beginning of another,” she says. “We live in a frantic, frenetic world, but when I’m here it’s as if I’m in my own clear, peaceful bubble. It’s only when I look out my window and see the skyscrapers that I realise there’s a bustling city surrounding me. One needs to move on, move forward and move up and that’s exactly what this makeover has helped me achieve.”