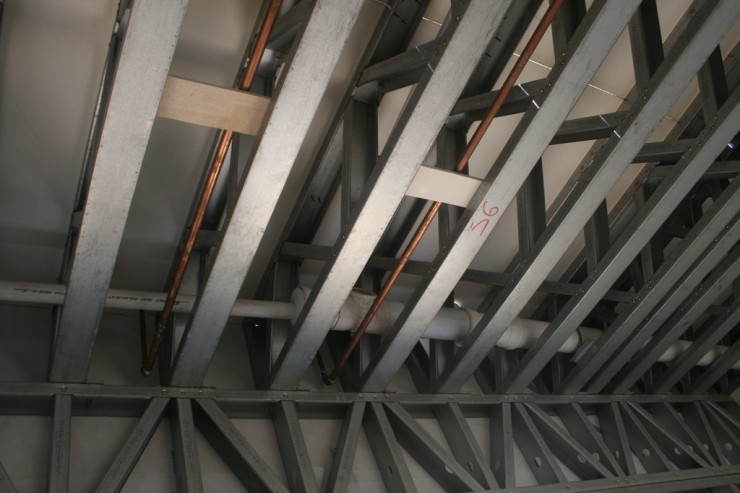 So how does the price of a LSF house compare to that of a brick and mortar house? This is the great burning question. This is the first thing that everybody asks when they pay us a site visit, so I thought it was time to answer…

The answer is simple and two-fold. Firstly, the cost of erecting a LSF house is marginally cheaper than a brick and mortar home in the short term (it can be substantially cheaper if one goes for thinner boards, or lesser spec). Secondly, the cost-saving of the insulation is a huge long-term advantage as heating and cooling costs are significantly reduced.
The question I ultimately hope to answer (but it will probably only be realised after living in the house for a year or two) is whether the entire “green” solution is sustainably cheaper on the pocket (it will be cheaper on the environment). We are putting in a solar inverter system and hope to be almost independent of Eskom. We are installing a few gas appliances and solar lighting for outdoors. We are planning to use run-off water for irrigation, although that will not be installed immediately.

Further, we are open to other ideas. Someone suggested today that we start a wormery for compost. I had hoped to start a veggie garden, but traditional compost somehow appeals more than wiggly creatures (I’m not asking the three-year-old for her vote on this matter).

Now back to the build. This week our roof trusses went up, and the outer skin of walls is up completely. We can now get an idea of the finished product: the pillars at the garage entrance have taken shape, as well as the entrance. The patio is also starting to look like part of the building now. The internal plumbing has been completely installed with copper pipes neatly laid in the joists between the floors. My husband has been scouring the Internet for bargains, and he ordered a whole lot of plumbing fittings (including showerheads with colour coded LED lights for when the water gets too hot), which arrived via courier service a few days later.

We have asked a garden design expert for some advice on setting up our new garden, and I am waiting with bated breath for her ideas on indigenous trees.

We are focusing more and more on the lighting. The more we look, the more ideas we come up with, and the tally of lights in the house is exponentially increasing. I’ll have to blame our project manager because he keeps saying, “have you considered a bulkhead here with some down-lights”, or, “what about a dropped ceiling in this room with concealed strip-lights”? Problem is, he has really good ideas, and once the idea has taken root there is no pulling it out of my husband’s head!

Oh dear, the door bell has just rung again, and my husband is excitedly telling me of yet another delivery of down lights. I hope the electrician gets finished soon…